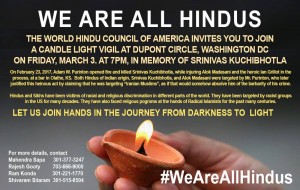 The World Hindu Council Of America held a candle light vigil at Dupont Cricle, Washington DC on Friday March-3-2017 at 7:00 pm in memory of Srinivas Kuchibotla.

On February 23, 2017, an Indian engineer, 32 yrs old Srinivas Kuchibotla, was shot dead by Adam Purinton at the Austins Bar & Grill in Olathe, KS. His Indian friend, Alok Madasani, was injured in same attack. Ian Grillot, 24, an American who tried to save them, was also shot and is recovering now. Mr Purinton who justified his heinous act by claiming that he was targeting “Iranian Muslims” as if that would somehow absolve him of the barbarity of his claim.

We protested such heinous attack. We came together to stand as a community united against a future based on hatred and ignorance manifesting as racism.

Hindus and Sikhs have been victims of racial and religious discrimination in different parts of the world. They have been targets by racist groups for many decades. They have also faced religious massacres in the hands of radical Islamists for the past many centuries.

Videos of the vigil:
Video 1
Video 2
Pictures from the vigil

A World Hindu Council of America volunteer Rajesh Gootyji gave the following message to all the good Samaritans that had gatherered:

I thank You on behalf of World Hindu Council of America for joining us at DuPont Circle in DC today & Leading our efforts in offering Peace Prayers, Candle Light Vigil in this demonstration of Solidarity. We are greatly encouraged by your support & participation with the Hindu American Community. Your presence today has energized the local, National & Global Hindu, Indian & Minority American Community immensely. We will continue to lead, assist & participate with renewed energy in such efforts and of other Interfaith, Diversity events.

I Come from the land of Mahatma Gandhi & I bring the message of Dharma, Ahimsa & Shanthi, (Justice, Nonviolence & Peace.) And Pray for an Inclusive, Tolerant, Respectful & Harmonious Society, whole with Good Conduct & Righteous Living. A great Saint from India, Swamy Vivekananda said: “The Gist of all Worship & Prayers is this – ‘To Be Pure & Do Good to Others.”

What Is Hinduism?! The goal of a Hindu is to pursue the path of Liberation or Self Realization. In Essence, Hindu philosophy states there exists a universal soul known as paramatma, Supreme Being or God. Living beings have a soul known as ‘jivatma’. The objective of existence is to try to merge the jivatma with the paramatma, Soul in unison to the God. Thus Leading to the ultimate path to moksha or salvation, which means the highest good. The final pathway to this is via “Sannyāsa” Phase, only possible when You are disposed of material attractions, One has to develop Vairāgya ( A Complete & total detachment).

Today, We are here to Pray for Peace & Harmony & to disapprove of any divide & show our strength in unity & Solidarity in these challenging times of growing intolerance, increased polarization & acrimonious disharmony both locally, Nationally & Globally.

How then we stop this hate & reverse this divisiveness?

Philosopher Edmund Burke Said: ‘The only thing necessary for the triumph of evil is for good men to do nothing.’

Today is a shining example, that good Men, women, kids, Families, neighbors & Friends have come together & have acted, so we have contributed our time – and some have contributed their talents by engaging here on this very site & some others have given their treasure by donating to the Go Fund me page. So while we are contributing our time, talent & treasure, we need to be vigilant, Vocal & convey our mutual respect among different faiths, religious practices and rise against racial, sectarian, ethnic, regional & other differences that divide society.

Gandhi said “A Small body of Determined Spirits fired by an unquenchable faith in their mission can alter the course of history.” We need to continue in that spirit of oneness in Thought & Action. We are one Nation Under God. We are One People. We have moved from being a local village to a Global Village. We are all connected. We need to educate our next generation about the common bond we have across humanity & de-emphasize superiority of one religion or spiritual path over another.

Manava Seva is Madhava Seva: Human Being is Being Human. Serving Humanity is Serving God.
And there is no greater service to God than serving HIS creation. (Of all of God’s Creations, we are the most evolved life form on this precious Earth. We are blessed with wisdom & the the power of discrimination to understand that we are all created equal in the eyes of our creator. )

Prayer For World Peace: “Lokah Samastah Sukhino Bhavantu” – May all beings everywhere be happy and free,  And may the thoughts, words and actions of my own life, Contribute in some way, to that happiness and to that freedom for all.

Thank you very much for Your time, Patience, Courtesy, Your Gracious Presence today. As always, We look forward to having a healthy working relationship with the new Administration, Policy makers & the Community to promote the Best Interests of Hindu/ Indian & minority American Community.
Dhanyavaad!  Om Shanthi! May the Supreme God bless You All!  And, May God bless America!”

View Calendar
Back to top