On 14th July of 2017, concerned Hindu community representatives in Washington DC area participated in the rally to express their sorrow and shock on death and fatal injuries of several Hindu pilgrims, caused during their Yatra to the Holy Amarnath shrine in Kashmir.  The rally was organized in front of Indian embassy in DC near Mahatma Gandhi statue by World Hindu Council of America, DC chapter. 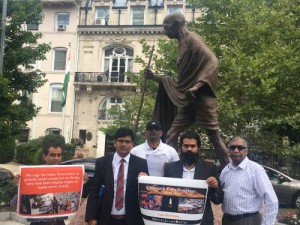 The delegates from DC area Hindu community met with Indian embassy officials and expressed concerns regarding loss of Hindu lives and handed over the following memorandum to pass it on to Prime minister and Home mister of India:

Hindus of USA are deeply saddened and shocked to learn about the death and fatal injuries of several Hindu pilgrims caused during their Yatra to the Holy Amarnath shrine in Kashmir. 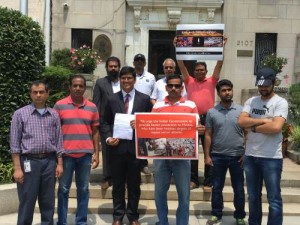 We condemn this attack and killings by Islamist terrorists. We express our sincere sympathy to their families. We stand with them in expressing our solidarity with all those affected by this act of violence.

As quoted by Congresswoman Tulsi Gabbard, “Hindus and pilgrims of every religion should be able to visit their holy places without fear of attacks by terrorists” in India and the Government of India must ensure this.

We urge the Government of India to provide enhanced security to all its citizens and protect them by taking stern measures against terrorists. We also urge the Government of India to take time bound and practical measures so that Hindus, where they are in minority, don’t have to live in fear for their lives; can practice their religion without getting murdered; safeguard their houses and businesses from being looted and burnt down, as it is happening in many parts of Kashmir, West Bengal and other parts of the country. 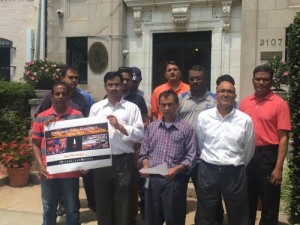 World Hindu Council of America is reflecting these concerns of Hindus in USA, and look forward for time bound measures by the Government of India to protect life and religious rights of Hindus in India.